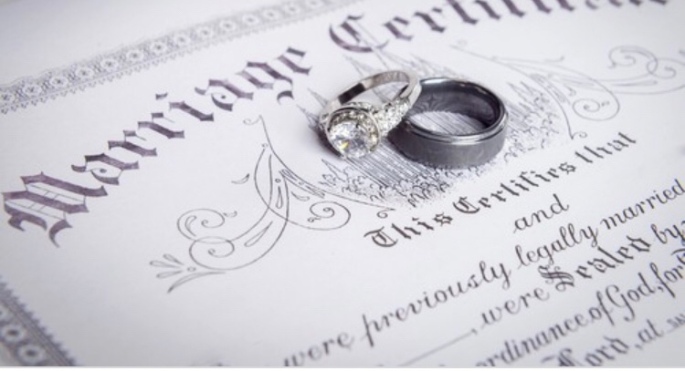 If a marriage license had an expiration date do you think couples would treat each other different?

There are so many licenses that need to be renewed, dog license, TV license, fishing license, driving license. But not a marriage license. I believe this is the one license that should be renewed.

Do you think that after a few years that a couple should prove that they are successful in their marriage and have to renew their license?

Now I agree this is written with a little tongue-in-cheek, but think of the possibility’s. I’m also aware that a brand new batch of legal issues would have to be addressed, but I also think its an interesting subject to ponder with regards to the quality of the marriage. Would the marriage years lived together be different? What behavioral changes would the couples make if they knew their marriage had a chance of not been renewed? Would they treat their partner as they did before marriage ? (You know “the honeymoon period” “the golden time”) where everything is sweetness and light and romance fills the air and the couple know that their marriage is going to be the best marriage EVER!

So let’s entertain me and say that the license is a renewable one. How long should it be valid before its renewed? Every year? Every two years? Everyone will have their own personal opinion on this time frame. But I think it should be every 5 years. The first couple of years couples are just getting use to been married. They would need time to settle into this. If after 5 years they decide to renew the license they could have another wedding ceremony, a party, another honeymoon or simply just renew their marriage license.

Lawyers could see this as a loss of potential income. Bare with me! If a couple did decide to divorce before their marriage license expired then the divorce proceedings would go on as before and divorce lawyers still make their bank trying to unite the angry couple. Of course if the couple decide after 5 years not to renew their license then the marriage legally dissolves and the couple divide all the goodies that they acquired in their marriage. Yes of course lawyers could still be needed for this part so the advent of a marriage license renewal should not put them off. Would this result in a better marriage between the two if they can resolve their issues? Would this make a better “end of marriage” scenario if they decide not to renew?

But I’m much more interested in what happens in the marriage between renewals . How will the marriage proceed during the interim? Would the couple act differently towards each other? Would they treat each other with more reverence? Would it feel more like they are dating rather than they are “stuck” with each other? How would it effect their behavior? Would it be better?

Could the fact that they must renew their license make for a better more rewarding , happy marriage? That’s the question for me because I’ve seen so many people living in misery while been married and I know so many people that have been divorced. It just seems clear to me that something needs to done to jumpstart the change. The status quo does not seem to be working at all.

Nothing lasts forever and if people must get married (and in my next blog I’ll tell you why I don’t think people should get married at all) shouldn’t it be a renewable contract.

You're only a stranger once

The Life and times of a Killer cook

Discover all the creative and ingenious ways to save money !

Get Your Swoon On

A Stairway To Fashion

imagination is the key

My life and views on everything from living with facial disfigurement to how I view the world.

what if poems could be symphonies, and people their orchestra?