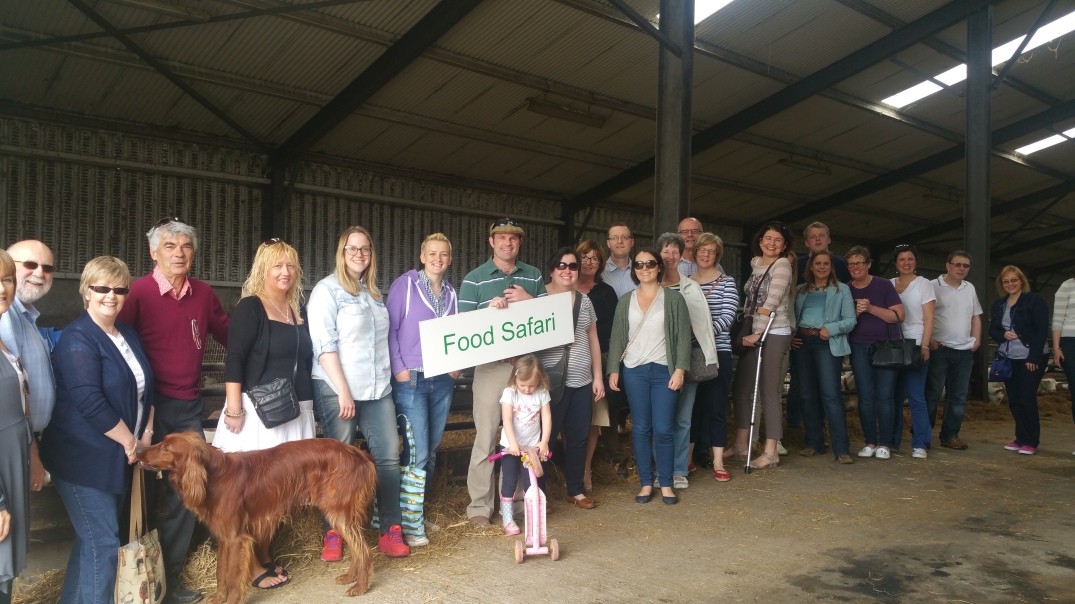 On the 13th June, The Meath Food Safari took place as part of the Boyne Valley Food Series. A group of over 30 people were driven all around Meath, where we met with 4 local artisan producers, Boyne Valley Blue, Burke’s Ice Cream. The Whole Hoggs and Newgrange Oil. We literally eat and drank our way around Meath.

We met in Slane and our first stop was to Michael Finnegan’s Goat Farm.  I was looking forward to this as I have seen so many great pictures and videos of his Kidd goats. After a little chat about his farm we were treated to some Goats Milk, Cheese and crackers.

Using the milk of their own herd of 300 goats, he produces , unpasteurized semi-hard blue-veined goats cheese, which was launched onto the market in 2010 some of his awards include,  a bronze in the Irish Cheese Awards and a thumping Two Star Gold at the Great Taste Awards.

Our next stop was to Burke’s Farm Ice Cream, Makers of the finest Jersey Milk Ice Cream and Sorbets. While Bernie was preparing an Ice Cream with Michael’s Blue Cheese we all got to taste a selection of ice creams and sorbets. We also got to look around the farm. Been lactose intolerant I couldn’t taste the ice cream but my sister did and said it was amazing, I did however taste the Sorbet and it was so fresh. I loved it.

Our next stop was to the Famous Mrs O’s pub, where we were all treated to a drink. I can declare the Guinness is amazing. One of the best pints i’v ever tasted. With a 360 Degree view of Meath it definitely is a must visit.

After a nice relaxing pint it was off to Peter Whelan’s farm where we were to meet his Hogg’s. Peter runs a free range pig farm in Slane County Meath. He keeps an old Irish breed called “The Irish Grazer”. He makes his own sausages,rashers, puddings & chorizo. There is so much more Peter would like to do with his farm, but its difficult to find the time when he works for himself by himself. He relies on his orders from Chefs and regular customers. With such a great product, it would be great to see it available more easily. Website

Next on our journey was a visit to Newgrange Oil. John Rodgers was there to meet us and we got a great tour of the factory. He is very passionate about his product and so he should be, its great. I love his oils and have every one of them in my kitchen. When they cold press their rapeseed and camelina they create the finest oil, high in essential fatty acids – omega 3, 6 and 9 and low in saturated fat.

With such majestic views we got to taste his oils with some great breads. You could sit there all day. But our last and final stop was back to Slane to Boyne’s Pub for a producers BBQ. We got to try Peters Sausgae meat made into a burger, with some of Michaels cheese, More of Bernis ice cream was for dessert. 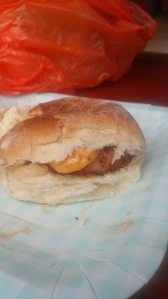 From every Producer we visited its clear to see the passion in their hearts. It’s not just about an income, even though this is very important but they have believes. They had a dream and they all have worked very hard to make their product a success. I for one am very proud to have them on my door step.

The Meat Food Safari was again another great success. One I would like to see happen more than Once a year. Well done to all involved.

Disclaimer: I am an official blogger for the Boyne Valley Food Series 2015. I did not pay for my day. All information is correct and Honest in this blog.