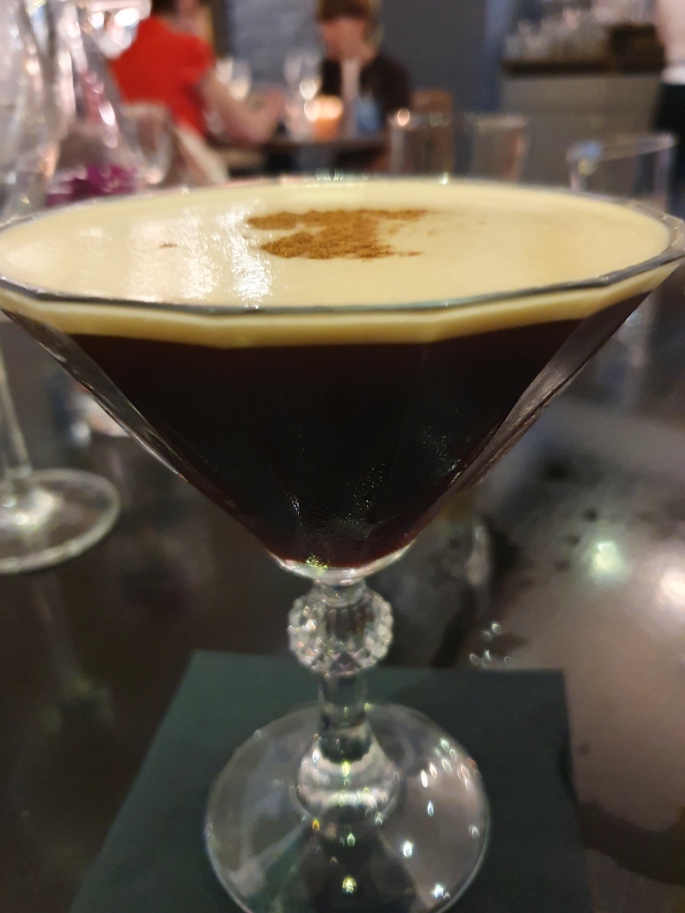 With lots of restrictions been lifted from Covid19, it was nice to get out.

Myself and himself decided to go for dinner to Luvida. Im glad we did. It was delicious.

We were seated at a nice romantic table for 2. The Early Bird was still available and the options suited us. 2 Courses €23 and 3 courses €27.

For starters I wanted the spicy chicken wings but they only had the BBQ flavour available (BBQ would definitely have been too sweet for me). Instead I asked if I could order the King Prawns and Mussels Pil Pil from the A La Carte and pay a supplement, this was no problem. Himself had the BBQ Pork Chunks. Both were delicious.

For mains I had the confit of Duck leg, which was served with Puy Lentils and a red cabbage puree and an option of a side. Himself had the Rib eye Steak with all the trimmings. He declared it was delicious.

Dessert was Sticky Toffee pudding for himself and an Espresso Martini for me. We had a wonderful evening. If I had to fault anything I would say that the food was a little cold, but other than that the evening was perfect. Will definitely return.

How great is it to live in The Boyne Valley? A valley that oozes natural beauty, with so many talented and creative people. The Boyne Valley is one long list of Ireland’s must sees and whats great about it, is that you dont have to travel all over to visit them, as they are just on our doorstep.

Newgrange, Trim Castle, Monasterboice, Trim, home not only to a castle but is featured in Mel Gibson’s Braveheart. Hill of Tara, former seat of the High Kings of Ireland. ( to name a few) History is one thing, and boy do we have loads of it. But history isnt the only thing you can dip into , The River Boyne is famous for its wild brown Trout. It’s all on the doorstep of Dublin, Belfast and several time-travelling motorways. We are privileged to be living in such an amazing Valley.

I moved to the Boyne Valley 17 years ago and even then it was a thriving  foodie Valley, I have always been intrigued about the local people and where they get their inspiration and talent from. I recon it comes form The Salmon of knowledge.

Running a restaurant is never easy. Food is very important and living in the Boyne Valley makes this a little easier. Amazing producers are just on our door step. Fresh orders arriving daily. Some of the producers we love in Copper and Spices are Whats for Pudding? Burkes Ice Cream, Kerrigan Mushroms, Bru Beer, Dan Kellys Cider, Meade Potato Chips, ( to name a few )

We also have great farmers and we source all our Meat from Meath farmers.

Living in the country ( Boyne Valley )  isn’t all about history, cakes, chutney and cute dogs, we have lots of…. SHOWBIZ

The thriving heritage towns like Drogheda, Navan and Trim have a lively restaurant scene. Home of some amazing multi award-winning Restaurants, Chefs, Hotels and Bars, where you will find local produced food showcased on your plate.

There is great community spirit in the Boyne Valley. I love that fact that I can walk into my neighbours restaurant and borrow milk, or a till roll. I love the way that everyone supports each other. I really like the community spirit.

Food is big in the Boyne Valley. I have written several blogs about how great the producers are.
If you have any questions or need a recommendation please don’t hesitate to contact me corrigansays@gmail.com 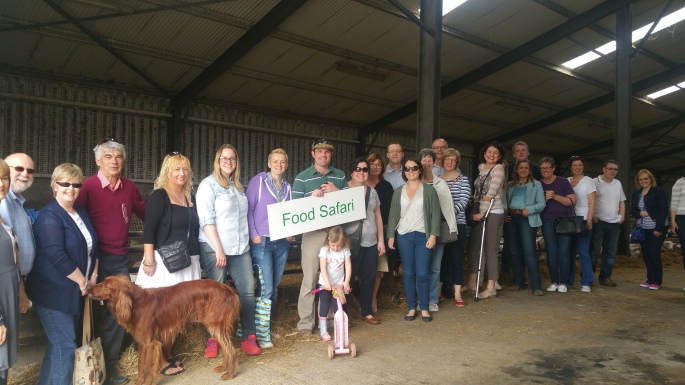 On the 13th June, The Meath Food Safari took place as part of the Boyne Valley Food Series. A group of over 30 people were driven all around Meath, where we met with 4 local artisan producers, Boyne Valley Blue, Burke’s Ice Cream. The Whole Hoggs and Newgrange Oil. We literally eat and drank our way around Meath.

We met in Slane and our first stop was to Michael Finnegan’s Goat Farm.  I was looking forward to this as I have seen so many great pictures and videos of his Kidd goats. After a little chat about his farm we were treated to some Goats Milk, Cheese and crackers.

Using the milk of their own herd of 300 goats, he produces , unpasteurized semi-hard blue-veined goats cheese, which was launched onto the market in 2010 some of his awards include,  a bronze in the Irish Cheese Awards and a thumping Two Star Gold at the Great Taste Awards.

Our next stop was to Burke’s Farm Ice Cream, Makers of the finest Jersey Milk Ice Cream and Sorbets. While Bernie was preparing an Ice Cream with Michael’s Blue Cheese we all got to taste a selection of ice creams and sorbets. We also got to look around the farm. Been lactose intolerant I couldn’t taste the ice cream but my sister did and said it was amazing, I did however taste the Sorbet and it was so fresh. I loved it.

Our next stop was to the Famous Mrs O’s pub, where we were all treated to a drink. I can declare the Guinness is amazing. One of the best pints i’v ever tasted. With a 360 Degree view of Meath it definitely is a must visit.

After a nice relaxing pint it was off to Peter Whelan’s farm where we were to meet his Hogg’s. Peter runs a free range pig farm in Slane County Meath. He keeps an old Irish breed called “The Irish Grazer”. He makes his own sausages,rashers, puddings & chorizo. There is so much more Peter would like to do with his farm, but its difficult to find the time when he works for himself by himself. He relies on his orders from Chefs and regular customers. With such a great product, it would be great to see it available more easily. Website

Next on our journey was a visit to Newgrange Oil. John Rodgers was there to meet us and we got a great tour of the factory. He is very passionate about his product and so he should be, its great. I love his oils and have every one of them in my kitchen. When they cold press their rapeseed and camelina they create the finest oil, high in essential fatty acids – omega 3, 6 and 9 and low in saturated fat. 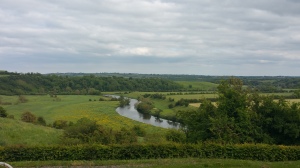 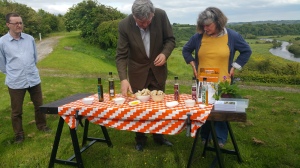 With such majestic views we got to taste his oils with some great breads. You could sit there all day. But our last and final stop was back to Slane to Boyne’s Pub for a producers BBQ. We got to try Peters Sausgae meat made into a burger, with some of Michaels cheese, More of Bernis ice cream was for dessert. 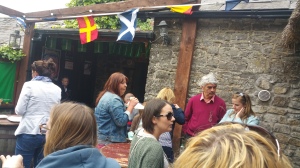 From every Producer we visited its clear to see the passion in their hearts. It’s not just about an income, even though this is very important but they have believes. They had a dream and they all have worked very hard to make their product a success. I for one am very proud to have them on my door step.

The Meat Food Safari was again another great success. One I would like to see happen more than Once a year. Well done to all involved.

Disclaimer: I am an official blogger for the Boyne Valley Food Series 2015. I did not pay for my day. All information is correct and Honest in this blog.

You're only a stranger once

The Life and times of a Killer cook

Discover all the creative and ingenious ways to save money !

Get Your Swoon On

A Stairway To Fashion

imagination is the key

A Trip to Ireland

A guided-tour through Ireland, Irish culture, and history.

My life and views on everything from living with facial disfigurement to how I view the world.

what if poems could be symphonies, and people their orchestra?